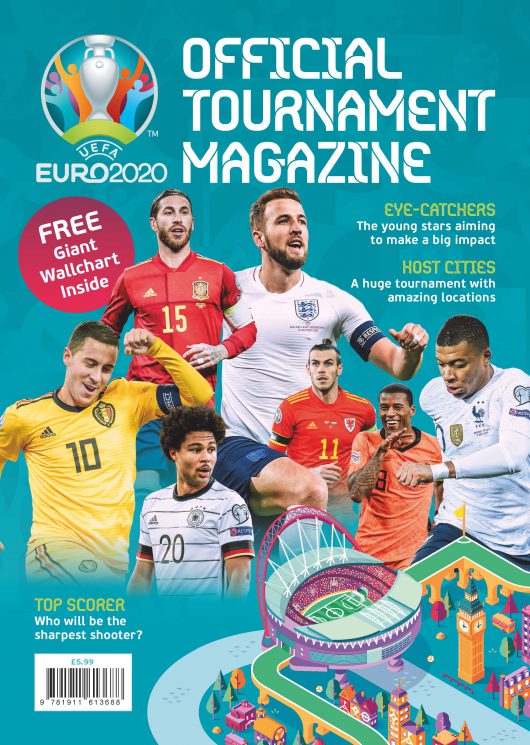 There’s a big summer of sport in store and at the heart of it will be a unique edition of the European Championships as UEFA EURO 2020 takes centre stage.

Europe’s biggest football tournament will take place across 11 venues throughout the continent for the first time with 24 teams competing to take part in the final at Wembley England on 11 July 2021.

They will all be hoping to emulate Cristiano Ronaldo’s Portugal, who won the Henri Delaunay Cup five years ago – and Ronaldo himself will be back, aiming to break records in his fifth appearance at the EUROs.

The official tournament magazine captures all the drama and build-up – involving in-depth analysis of all the teams involved – and there will be a fabulous A2 wallchart included to help fans follow the action.

Ahead of this historic tournament there will be a look back at all 15 editions so far and a chance to test your knowledge in a giant quiz.

Looking ahead to EURO 2020 there will be a big interview with a star name, analysis of which youngsters could make the biggest impact and the European hotshots who will have their eye on the Golden Boot.

With the semi-finals and final taking place at Wembley, there is a focus on some of the famous stadium’s greatest occasions, plus a closer look at the other host venues across Europe.

EURO 2021 promises to be the biggest and best European Championship ever and the official tournament magazine will help readers get ready for the drama and excitement to come.

UEFA EURO 2020 Official Tournament Magazine is back in stock