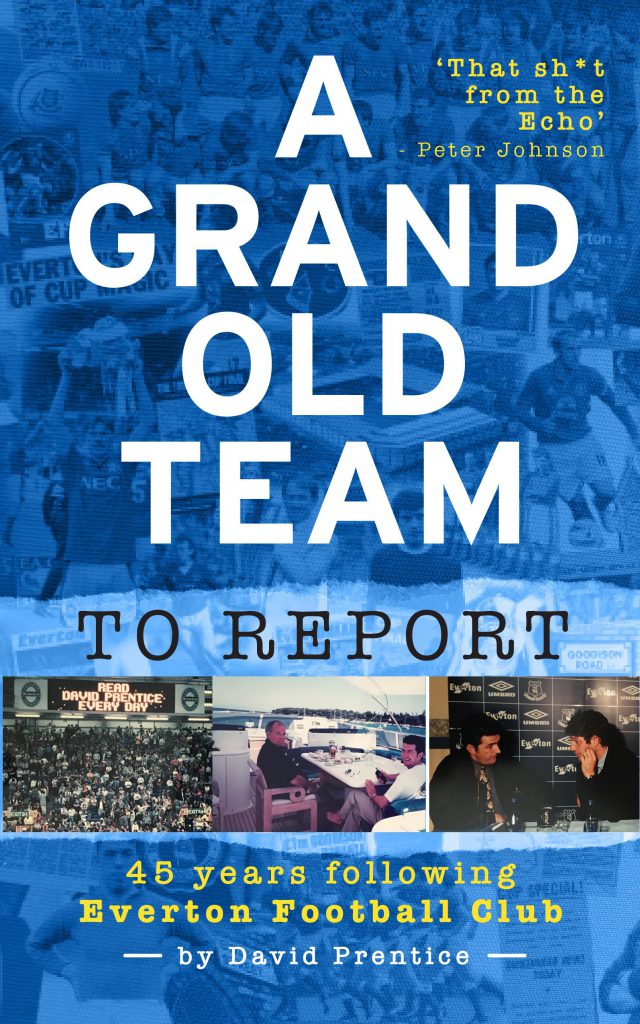 A Grand Old Team To Report is the inside story of a famous football club, seen from all angles – by one man.

David Prentice is the Sport Editor of the Liverpool Echo, the city’s famous newspaper. He has reported on many memorable sports events over many years, but most of all he has written about Everton, the club he adores and has followed since he was a child. This is the story of his labour of love.

Many writers have written about their adoration of their favourite team before – but none has had the access and insight Prentice has enjoyed for three decades and more. He gives readers an unparalleled look into the machinations of one of English football’s oldest and most successful clubs, starting as a supporter sitting on a crush barrier in the 1974/75 season. Forty five years later he was a boardroom guest of chairman Bill Kenwright.

In between he reported on The Toffees’ last league title triumph, travelled with the team on hilarious pre-season tours in the 1990s, befriended players and managers – Walter Smith and Joe Royle attended his wedding to the granddaughter of the club’s greatest ever player Dixie Dean – and was witness to incidents he has never before committed to print. There were relegation escapes and an FA Cup triumph, the inside story of Duncan Ferguson’s controversial transfer, how he was asked to act as a witness for David Moyes in a legal battle with Wayne Rooney – and how he sat in the dock of a kangaroo court presided over by Tim Cahill with the entire first team squad sat in judgement.

A Grand Old Team To Report charts almost half-a-century of Everton Football Club’s history – from a unique insider’s viewpoint. It is a fan-fare and a news report. A travelogue and a social comment – and a poignant reflection of how football and journalism has changed forever.