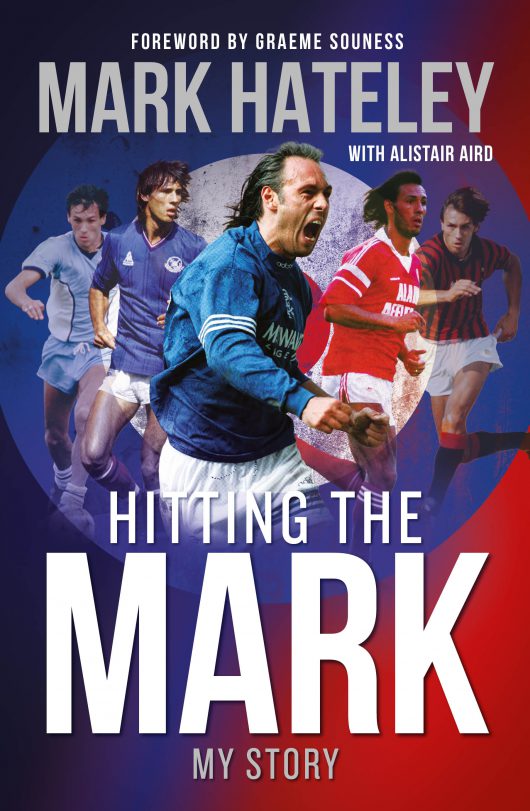 Born into a football family – Mark’s father Tony played for among others, Aston Villa, Liverpool and Chelsea – Mark was destined to forge a career in the game. After starting out with Coventry City, Mark spent a year at Portsmouth before earning a lucrative move to Serie A with AC Milan. A fearsome, all-action centre forward with an eye for goal, Mark immediately endeared himself to the fans of I Rosseneri when he scored the winning goal in the Milan derby against Internazionale.

Still revered by the infamous Curva Sud today, Mark left Milan in 1987 and joined Monaco. He scored 14 league goals and won the Ligue 1 title in his debut season, but two serious ankle injuries ruled Mark out the game for the best part of a year. Mark reflects honestly on his rehabilitation and the impact his absence from football had on him.

When he was fit to return to action, Mark moved to Rangers for a fee of £1,000,000. And during his time at Ibrox, he won six league titles, three Scottish League Cups and two Scottish Cups. Mark struck fear into the hearts of Scottish defences and scored over 100 goals for Rangers. He forged a prolific partnership with Ally McCoist and became the first Englishman to be voted Scotland’s Player of the Year in 1994.

Despite this Mark was overlooked for a place in the England squad. Capped 10 times at U21 level, Mark was the winner of the Golden Player at the 1984 U21 European Championships and announced himself at international level with a goal in the Maracana in 1984. But he only added a further one cap to his senior level total of 32 while with Rangers. In the book, Mark explains why he was overlooked so often and how it galvanised him and made him play at an even higher level for Rangers.

Mark joined Queens Park Rangers in September 1995 but returned to Ibrox 18 months later to help the club clinch their ninth successive league title. After a short spell as player-manager of Hull City and an ill-fated move to Ross County, Mark moved into the media and has latterly been an ambassador for Rangers.

Hitting The Mark is written with Alistair Aird, an experienced writer who has published several popular and well-received books on Rangers Football Club. Contributing to the book are a host of big names including Arsene Wenger, Sir David Murray, Glenn Hoddle and Paolo Maldini.

Mark Hateley – Hitting the Mark is back in stock